To celebrate 17 years living at Sonnystone Acres, we are publishing a series of posts chronicling the first three families who lived here, spanning 111 years… This is the twelfth installment of the series.

I am not a fan of naming your children after yourself, but then I did name my son Michael after his father so I lost my complaining rights.  I know first-hand how confusing it gets until you finally call one Michael “Mike” and one “Mickey” or “junior”.   So I’ve tried to not get too judge-y about Albion Fellows Bacon naming her second daughter her own name: “Albion Mary”.  In 1892, the elder Bacon was 26-years-old and certainly not famous yet.  While her friends and family called her Allie or Albion, she was styled “Mrs. Hilary E. Bacon” back then; all women of society did.  So for whatever reason, the little girl born on 4 Jan 1892 to Hilary and Albion Bacon was named Albion Mary Bacon and I will call her Albion, Jr.

For the first years of Albion, Jr.’s life her mother was in a deep depression, unable to interact with her or her sister, Margaret, who was three years older.  With the house dark and silent, the girls were most likely cared for by Nannies, but there were also plenty of extended family members living very close by.   The girls’ grandmother, Mary Erskine Fellows, lived just a block away with their Aunt Lura Heilman, their mother’s oldest sister.  Aunt Lura had a big family, including two daughters around the same age as Margaret and Albion, Jr.  Aunt Annie Fellows Johnston lived just a couple of blocks away, as well. Their father’s family lived down in Roaring Springs, Kentucky and holiday visits were made there.

By the time her mother was back engaging with life again, Albion Jr was seven, Margaret was ten, and the World was entering a New Century. The family moved into a new home that was even closer to their Aunt Lura and Grandmother Fellows. Their father had formed a new partnership and in 1898 he and Adolph Lahr opened the Lahr-Bacon Company at Sixth and Main in downtown Evansville…business was flourishing. 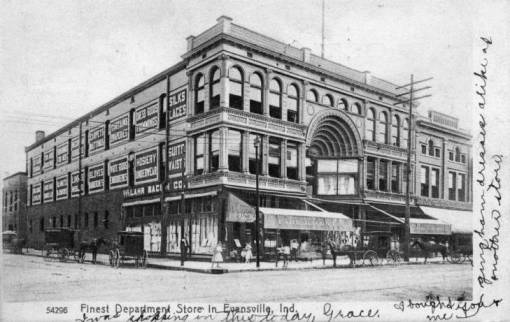 Part of Albion Sr.’s return to living must have involved getting to “know’ her husband again, and she gave birth in 1901 to twins, Hilary, Jr. and Joy.  The twins never knew their mother to be depressed, that’s certain.  Albion, Sr.’s involvement in social and housing reformed started about 1906, when Margaret and Albion Jr were both attending Evansville High School.

Albion Jr’s older sister, Margaret, graduated from Evansville High School with honors in 1907 and went away to school at Mt. Vernon Seminary, a finishing school in Washington, D.C.  In 1909 she went to El Paso, Tx to be a bridesmaid at a school-friend’s wedding.  The night before the nuptials, Margaret Erskine Bacon collapsed and died.  It was a shock, to say the least.  No one knew she had a heart ailment that had most likely been congenital. 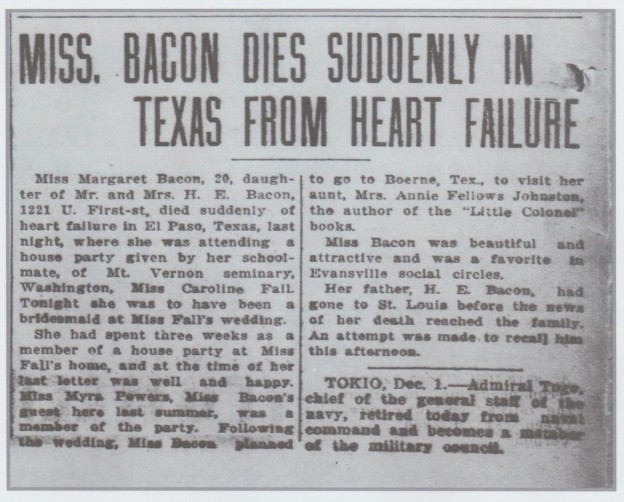 While that slowed Albion Fellows Bacon down for a couple of months, she powered on.  She seems to have pulled Albion jr in a little closer.

After graduating, also with honors, from Evansville High School in 1910, Albion Jr went to college, but I’m not sure where. 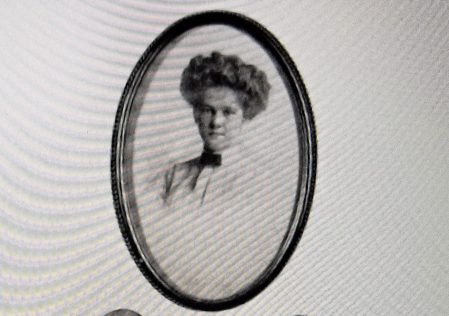 By 1912, though, she is frequently escorted by George Davis Smith.

Smith was the only child of George Clarkson and Delia Davis Smith.  George C. Smith, with the help of his father, Jonas, a shirt manufacturer, had opened Young American News Depot in 1866 when he was only 14-years-old.  It took off like a flash and was The Place to buy books, magazines, newspapers.

In 1882, A. S. Butterfield, a successful book and stationary salesman, became partners with Smith, and the Young America News Depot became Smith & Butterfield, a company still in existence today and very familiar to native Evillians…

George C. married Delia Davis, from Michigan, in 1884, and their son, George Davis Smith, was born in 1886.  The family lived in the same neighborhood as the Bacons and George D. graduated from Evansville High School in 1908.  He then attended the University of Michigan where he studied who knows what?  Probably Business?  He was very active in the local alumnae group, according to news articles. 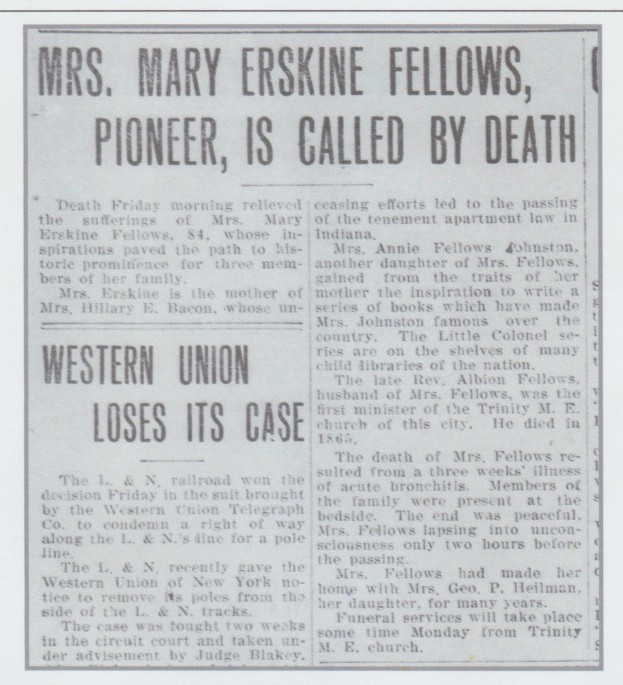 In 1913, George Davis Smith and Albion Mary Bacon announced their engagement and it was met with rounds of parties from the social elite of Evansville.  They were married on January 14, 1914.

The couple took up residence in Audubon Apartments, a beautiful building built by the groom’s father, located two blocks from the Bacon and Heilman residences.  They seem to be a social couple and I read several paragraphs in the “Personals” over time chronicling Albion Jr’s club meetings or teas.  I’m not sure what George D. had done before the marriage, assuming he worked for his father, but by 1916, he was Treasurer for his father-in-law’s store, H.E. Bacon & Co.

In 1917, Mr. and Mrs. George Davis Smith celebrated the birth of a son, George Bacon Smith.  I feel like this announcement has to be a typo — 14 pounds!!  What a lucky child, rich with love and money. 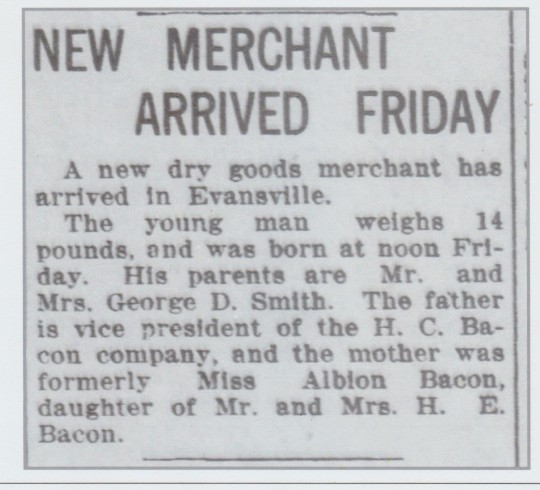 In around 1923, George and Albion (I can surely drop the jr by now) bought a house and acres in an area that was becoming quite a fashionable area for summer places.  Just five miles out from their Audubon apartment, it was a quaint little house and some outbuildings on 20 acres that included a small pond.  Finally! we are back to Sonnystone, though my acres number only 4.

From 1923-1928, the Smith Family only used Sonnystone as a summer home, making gradual improvements.  George’s parents, George C. and Delia D. Smith, died in 1925 within months of each other, and George D. sold the Smith part of Smith & Butterfield to the Butterfields.

In 1927,  George D. and Albion, along with their 8-year-old son, George B., traveled to Europe.  While visiting Nice, France little George’s appendix burst.  Within hours he had died of peritonitis.

If I am as sad as I am reading about it, think how devastated the parents were.  I can’t.  It’s just horrible.  His little body was brought back home and buried in the family plot at Oak Hill Cemetery.

George and Albion Smith lived here at Sonnystone Acres from 1923 until 1957.  I have some information about their years here, but must go to Willard to fill in some gaps.