Well, hey there, Sonnystoners!  It’s been a six weeks since I’ve reported the News from here at the Acres.  I hope you’re enjoying reading the Sonnystone Saga as much as I have enjoyed writing it.

Since the last report 42 days ago, my Aunt Shirley died. 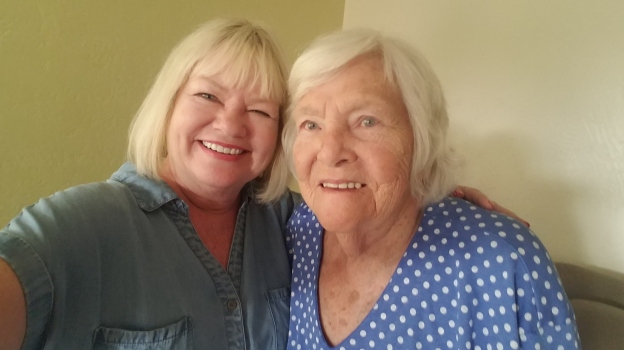 If you’re a regular reader, you remember that she had her Dyin’ Party  back in June.  There was another fall after she returned to Florida and things went downhill.  She passed on August 13.  I was in close communication with the cousin who was her caregiver and the whole process has had me on the phone more than I have been in Years.  Talking on the phone drains me and I don’t know why I liked it so much in my younger years; maybe back then I had more energy to drain.

Just after Shirley’s death, we celebrated our 40th wedding anniversary with a trip in the trailer to Harmonie State Park.  We’ve spent many an anniversary camping there and it’s always relaxing, yet invigorating.  I’ve reflected over the last 40 years and come up with no enduring complaints.  We are very happy together and grateful for each other.

That may have been our last trip in the travel trailer… I’m sad, but our original intent is quite different from the current reality.  We had planned to spend a couple of months each winter down in Melbourne, FL, near Aunt Shirley and my Cousin Kim.  Florida State Parks are so cheap and beautiful, but it was impossible for me to get reservations during the snow-bird months.  There are plenty of other nice campgrounds, if you can get in, but they cost much much mucho more $.  We’ve gone down there for the last three winters trying places out, but nothing pleased us…that we could afford.

Of course, we’d also planned to do the out-West stuff, like the NM trips, but decided last year that we didn’t want to haul the trailer up into the Rockies.  Making it all the way to California would take days and mega gallons of gas (the gas consumption is much higher than we thought).  There, too, it’s not easy to find affordable campgrounds.

So we’re putting everything back into the trailer just the way it was when we bought it,  ugly upholstery and all.  When Casey’s got it shining, we’ll put a for sale sign in the yard and see what happens.  If it doesn’t sell this fall, we’ll cover it up and put it away until next year.   If you know anyone who might be interested in buying a well-kept 2017 Coachmen Catalina Legacy, send me a message.

The Anniversary trip was supposed to be to Disney World, but we opted against masks all day in 100degree, muggy weather.  We did renew our Annual Passes, though, and feel that it’s safe enough to go sometime this fall.  We’ve booked our rooms for 2021 Spring Break with the Jrs., showing our hope for the future.  It’s hard to make plans right now; everything seems uncertain, like standing on shaking ground.

The Bright Spot in my Days lately has been researching and writing The Sonnystone Saga.  I could go on and on, so I have decided I will.  I have another blog, All My Ancestors, where I have written about my greats and Casey’s illustrious kin. There are still several branches of the families to pursue, so after I finish up the Saga, I’ll dig in to those roots. I’m going to post those on Mondays, here on Sonnystone.  I’ll return to sharing the Weekly Report on Sundays and not get so far behind!

Did you know I have a gardening blog, too?  I post a photo/journal entry there every week on Thursdays.  I’m going to “move” those posts over to this blog starting this week.  For now, that will be posts on Sundays, Mondays, and Thursdays.  I’m excited..!

The Twelfth installment of The Sonnystone Saga will be published tomorrow.  Thanks for Reading!

One thought on “Sunday Report”