To celebrate 17 years living at Sonnystone Acres, we are publishing a series of posts chronicling the first three families who lived here, spanning 111 years… This is the thirteenth installment of the series.

My visit to Willard Library produced a plethora of information.  I was looking for the obits of George D., Albion, and George B. Smith, but was unable to find young George’s.  What I did find filled in quite a few gaps of the years and corrected some of my assumptions.

After little Georgie’s death in 1926, the Smiths returned to Evansville and retreated to their country home.  1927 was the first year that the city directory listed their residence as “Stringtown Rd 5 miles out”; prior to then, their address was on Riverside Dr.  I speculate that they kept a place “in town”, though, since George owned the apartment building and still worked at his father-in-law’s store.

What I found on George Davis Smith was not an actual obituary…it was Front Page Lead Story…!!

You couldn’t have any easier research than that. The article is a long one, continued on p. 7 with a picture.   It covers his early life and is essentially the same info I gave you in my last post (Here) .  It does not mention the loss of little Georgie in 1926, but fills in the years after that.

In 1929, the H.E. Bacon Department Store was sold to Woolworths,  after which George and Albion spent about six months in California.   According to the 1930 census, George and Albion, now 44 and 38 respectively, are living here at Sonnystone and George is retired…but not for long.

In late 1930, George joined Harris Upham’s newly-formed Evansville branch and became its manager in 1933.  The brokerage firm had sensational growth under Smith’s management.

A lot of column inches are devoted to stories of George’s pranks…yes, he was an inveterate practical joker, often referred to as “Jokesmith”.  I abhor practical jokes, seriously avoid practical jokers, (even George Clooney) and did not find any of the pranks the least bit funny, though the writer of the article seems to have been very amused.  They were quite elaborate and there were retaliations, so the stunts went on and on.  Not funny to me, but he seems to have been very popular among Eville’s prominent businessmen.

After we started clearing off the back acres here at Sonnystone we came across a slab of concrete with a rusty skeet trap attached.  A skeet trap throws clay pigeons up in the air and shooters try to break them before they fall.  There were more of them scattered around the 20 acres that the Smiths owned.  George was an expert shot and one afternoon at a trap-shooting match with a party of friends here at Sonnystone, he played one of his practical jokes.  While everyone was breaking targets, one fellow, usually a good shot, couldn’t hit the side of a barn.  Later on he found out that George had given instructions that every time it was that guy’s turn they threw aluminum pigeons instead of clay.  very funny…ha ha ha…

But it tells me what Sonnystone was like in those days.  An avid duck and quail hunter, George kept a kennel of fine hunting dogs here.  Between duck and quail season, he hunted possums and coons at night.

Oddly enough for a duck hunter, George loved birds.  He built trail of bird feeding stations around the property and kept them filled with food for his feathered friends.

But what of Albion Smith? Her mother, Albion Fellows Bacon, died in 1933, suddenly of a heart attack.  Her obituary was a mile long, as was the viewing line at the funeral. Shortly after, her father, H.E. Bacon, who was in ill health. moved to Baltimore to live with son, Hilary, Jr., a doctor at Johns Hopkins.  He died there in 1936.

Mrs. Smith’s  obituary was much more cut and dry, but still filled in some gaps. 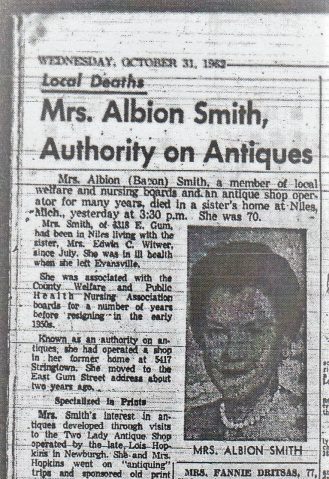 So which part of the house “lent itself to the display of furniture”?  It’s a mystery to me, as this house is Not Fancy.  There is no fine woodwork or trims, no classic columns or stairways; it’s a plain country house.  Albion had been raised in opulent Victorian and Edwardian homes and may have even started her shop selling her mother’s furniture, so how this house “lent itself” to display of anything other than primitive or shaker pieces is a mystery…one I continue to investigate.

George and Albion both served on various boards around the city, but were not particularly known for philanthropy and were decidedly not social activists.  They traveled broadly, according to both obits, visiting Europe and Northern Africa.  They spent time in Michigan with Albion’s sister, Joy, and in Maryland with her brother, Hilary.

One story is very telling about the Smiths:  George’s work at Harris Upham was so good that he was offered a promotion to managing the Indianapolis office, the next step on his way to the top.

As the article puts it: “It was a flattering offer, not to be scorned, but sitting on the lawn of his home, surrounded by his dogs, his ears filled with the music of the birds, he decided to reject the offer.  He explained to Mrs. Smith, “What I have here I could never find any other place in the world.”

That’s the way I feel about this place, too.  I knew from the minute I saw it that I had to live here.  I could tell that the house and grounds had been cared for and loved, then let go.  As we’ve done the “archaeology” and discovered areas that appear to have been gardens, spots where it looked like someone kept dogs, and uncovered stone walks that lead to nowhere, I’ve felt the presence of Albion and George urging me to fix it up, make it pretty, invite the birds, and be content.

George Smith died in 1955 and Albion sold the home two years later.  She divided up the 20 acres into parcels, leaving the house with four.  She moved to a home on E. Gum in Evansville.  In 1961 she became ill and went to live with her sister, Joy, in Michigan; she died there in 1962.  She and her two Georges are buried in Oak Hill Cemetery, a spot on my to-visit list.

Having spent her life overshadowed by her famous mother, and having an even more-famous author aunt, I wondered if Mrs. Smith’s obit would also prominently speak of them.  Interestingly, it only gives her mother a line, but devotes an entire paragraph to her Aunt Annie. Her obit does not mention the birth and death of her son, the most important part of her story.

After the Smiths, no family lived here more than four years until 1970 when Max and Candace Casler bought the house.  The Caslers stayed until Max’s death in 2003.  Sadly, the Caslers let the place go downhill during their 33-year tenure.  Next week, I’ll show you some more “before and after” pictures.