We arrived at the Abuquerque/Bernalillo KOA by 12:30, got set up and checked the place out. It’s a nice one, sweet pool and patio, clean and quiet.  Our first stop was to follow the signs for Kaktus Brewery at the other side of the campground and try some of their beer.  It’s just a quick walk to a really cool place and we went back several times.

Unfortunately, Sonnystone, too had a leaky tire.  The next morning we visited a Big O Tire to get it fixed — we had a good spare that we put on.  While waiting, we headed for the nearest grocery store and picked up some steaks to grill that evening.  After dinner a big wind blew through and I headed out to bring in some stuff.  Wearing my Nike slides, I slid off the bottom step and gave my left foot a really good twist, bruised my right foot, and skinned up my shin.  Whaaa???  Since we had planned to hike the next day at Petroglyphs, our plans had to change…

We just readjusted and visited the Pueblo Indian Cultural Center.

I want to say more in another post about what I learned from this place and how it affected me.  We also ate at their restaurant and it was delicious.

I had so looked forward to seeing the Petroglyphs, but the next day my foot was still sore.  We went down to the Visitor Center which is not adjacent to the hiking trails.  There we watched a 20-minute movie that explained how the volcanic escarpment was formed, why they were able to carve on them, how they carved on them and some ideas about what they mean.  We picked up some trail maps for the next day’s hiking.

Then we came back toward our campground and about 3 miles beyond to Coronado Historic Site.  This site has a large underground Kiva that used to be covered with murals before the archaeologists came in and carried it away to the University of New Mexico.  To their credit, they went through a big process to preserve them and 7 are on display at this facility.  You can also climb down into the Kiva to see one that a Native painted for them, but we missed the tour.  Not sure my foot was up to it, anyway. 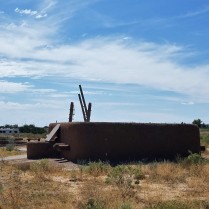 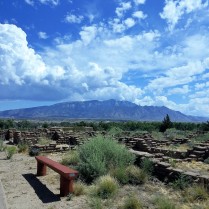 Sitting outside were some Natives selling jewelry and carved cottonwood kachinas.  I talked with the carver for quite a while.  That, too, is something for another post.

Finally, yesterday we got up early and went out to see the Petroglyphs.  The foot was only tender, so I was ready for the main attraction… 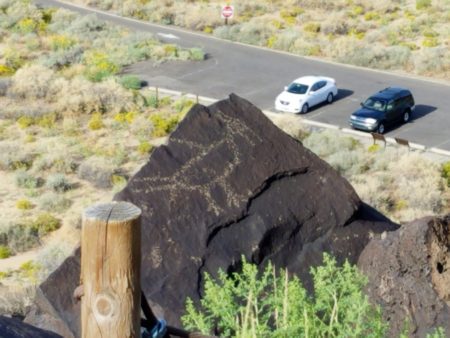 I hate to admit it, but I was terrified the entire first hike, and that was the shorter one!!  It is like a rock climb.  I mean, I fall on 3 steps…we were a mile up in the air standing on ledges…!  The only thing scarier than climbing up was the thought of climbing down.  But I made it!  The second trail had more flat and more handrails, so I was only scared… 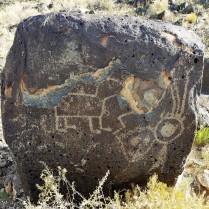 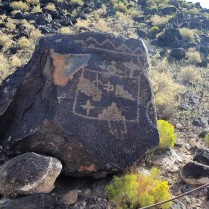 Old Town was just what I expected.  In fact, I had a feeling that I had been there before as we browsed through shops of junk-made-in-mexico.  We didn’t buy, but these were food for thought… 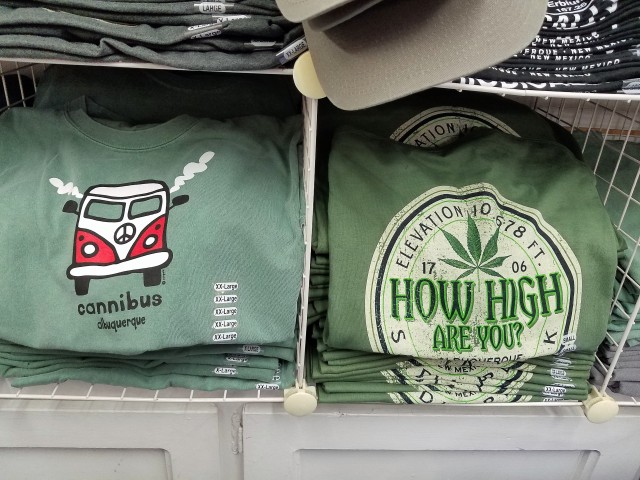 There was definitely more of a Spanish flair to the place with its tiny plaza.  The church is some famous very old church…  We ate at Church Street Cafe and appreciated the Mexican influence on our food, though! 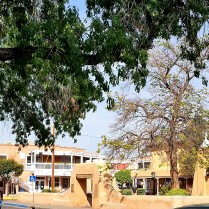 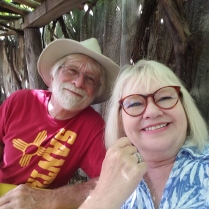 They’re predicting storms all day today, so it’s time to start the drive back.  We’re packing it in and plan on leaving about 10am rocky mountain time heading toward Amarillo, probably arrive about 5 or 6p central time.  Then we’ll plow on through the next two days, stopping at the same KOA that we visited on the way here.

That’s the outline, but the story is so much richer, deeper, and enlightening for me. You can bet I have tons more pictures of big skies and Sandia Mountains and I’m looking forward to returning home and writing about what I’ve learned.

One thought on “Travelogue Days 7-11”