Since the girls left, we’ve gone back to our no-routine routine.  Casey’s always busy with something, as usual, but even he stopped to just relax in the pool yesterday.  A Big Wind blew through yesterday afternoon and he’ll stay busy this morning cleaning up the leaves and branches.

I still won’t go out in the grass (chiggerphobia) until this Thing on my thigh is completely healed.  To that end, I have an appointment with a surgeon on Wednesday.  I feel a little silly because it is now so small, but I want to hear what he thinks about potential re-infection.  I’m on another round of antibiotics and would like to stop that pattern.

I’ve got to do Maintenance this week:  mani/pedi, hair highlights.  I’m working my way through the vegetables, eating a lot of buttery zucchini, sliced tomatoes, and dipped bell peppers.  I think I’m losing weight, but my scale is still weighing in stones…I think I like it better that way…

It will be three weeks until we set out on our NM-CO Adventure.  Our first Long trip in the trailer was three years ago to Santa Fe, NM.  We were so green and learned so much.  Casey was still working, so our time was restricted—six days driving, three days there!!

We went to Bandelier National Park our first day.  The hike we took was perfect for me, though I did not climb too high on the ladders… 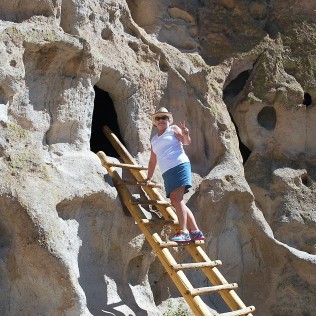 The next morning, trying to take a decent picture from the overlook of the Rio Grande Gorge Bridge, I tripped and fell…bloodied both knees and scraped up my hands…I soldiered on, griping and with a few tears…

I limped around Taos and we enjoyed lunch at a nearly-empty La Fonda where the chef came out and brought us extras of his soups….

But the Pueblo was closed and we missed the High Road going back to Santa Fe and that just clinched it:  we’d have to go back someday.

I fell in Love with Santa Fe.  It vibrates with history.  I loved the Plaza and the Cathedral Basilica of St. Francis of Assisi (the Mother Church).  As we had our dinner on a balcony, we could see the musicians beginning to arrive to busk for the evening.  We didn’t have time to see the Georgia O’Keefe Museum, so we knew it:  we’d have to go back someday. 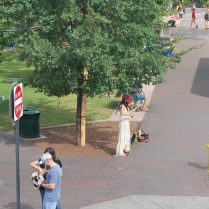 Someday is nearly here, but there’s little to do but plan it right now.  I’m dubbing it the KOA tour, as we’ll be staying at KOAs in Joplin, MO,  Amarillo, TX,  Albuquerque/Bernalillo, NM,  Pueblo/Colorado City, CO,  and Salina, KS.  As members we receive a 10% discount on already-low-prices; we’ve collected $20 worth of reward points, and one night will be $0 as part of their semi-annual Free Night…maybe I should call it the Cheap-o Tour.

We’ll take the High Road to Taos this time and I’ll watch where I’m stepping.  I am pumped for the O’Keefe museum and a tour of her home and studio, Abiquiu.  Petroglyphs National Park has long been on my list of places to see, not only because I’ve heard of alien sightings there, but also because I’m intrigued by petroglyphs.  Nearby is Old Town Albuquerque which deserves a visit, if only for the shopping.  There’s plenty more to do and we’ll be staying five days so we can get it all done and still have some time in the pool…

We decided to return home via Colorado, but you may have guessed I’m not into those Really Tall Mountains except from afar. The air is way too thin on Pike’s Peak for an old smoker.

Until it’s really time to get ready for the trip, I’ll be hanging out, doing whatever. I’ve been on a not-reading-books binge for a couple of months, but the night before the Joses left I broke the spell and stayed up all night to finish “Relative Fortune”.  I uninstalled Candy Crush and I’m on a Reading spree!

I’m going to get out the Ancestors photos and get started posting those over at the Ancestry blog.  Maybe I’ll see you there.

I’ll let you know if there’s any News…

One thought on “More Monday musing…”