To celebrate 17 years living at Sonnystone Acres, we are publishing  a series of posts chronicling the first three families who lived here, spanning 111 years… This is the second installment of the series…

Jacob Miller was born 1812 in the Electorate of Hessia.  It’s unclear when he came over from Germany and finding a Jacob Miller/Muller/Mueller in the plethora of German immigrants who swarmed into Vanderburgh County in those days is like finding a needle in a haystack.

What’s certain is this particular Jacob Miller was 26-years-old when he married Maria Klein in 1838.  He bought his first 20 acres of land in Center Township in 1840 and opened a blacksmith shop, one of many in Mechanicsville,  on the north corner of Sonnystone, near the State Road (now Stringtown Road).  Just up the hill, they built the original Sonnystone house, and the hand hewn logs that Jacob placed as a foundation still hold the place up quite nicely today.

The Miller children were educated in the schools of the time.  John died before 1860, probably right here at Sonnystone  None of the sons became blacksmiths, but they made their own way.

In 1860 the Senior Millers sold Sonnystone and moved the blacksmith shop south of Pigeon Creek near downtown Evansville.  His sons were grown and his daughter had married.

Oldest son Henry was working as a Post Office clerk in 1860, living down near the Ohio River. When the Civil War started, he found work on the steamboats and was a  Union Army Captain by the end of the war.  He married a lady from Nashville, TN in 1868 and together they had three daughters.  Henry died in 1874, just 34-years-old.

By 1870 Jacob,Sr. had retired from the smithy and the couple were living with Conrad and Jacob Jr., all of them rather wealthy according to the census.   Conrad and Jacob, Jr. started work as store clerks, but by 1871 they established a business together: Miller Brothers Dry Goods.  Maria died in 1879.  Jacob, Sr. died in 1883.

In 1885 the Miller Brothers erected a building on Main Street that was the Largest dry goods store in the state at the time and for many years thereafter.

In 1886, Conrad withdrew from the business and moved to Boston and engaged in the same sort of business, becoming a successful merchant there. After Conrad left Miller Bros. Jacob joined in with W.S. Gilbert and the name of the business became Gilbert-Miller Dry Goods. 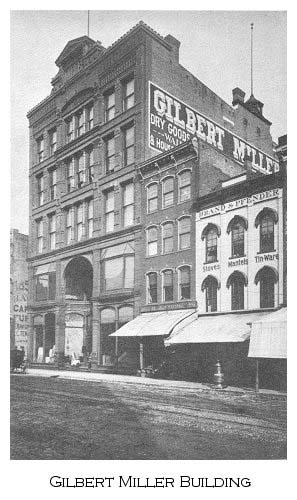 Jacob, Jr. never married, but has a lengthy biography in the aforementioned “History of Vanderburgh County” (1889) that gushes over his character and accomplishments. He served for a year in the Civil War, 136th Regiment of Indiana Volunteer Infantry and was also a city councilman for several years.

From Wikipedia:  Anna “Annie” Jenness Miller (January 28, 1859—August 1935) was a pioneering clothing designer and an advocate for dress reform, as well as an author and lecturer.  She basically loosened the corsets and invented “leglets” for women, making it easier for them to ride bicycles.  I think we call them pants today.    She was really cool, a member of the Massachusetts Women of Letters alongside the likes of Louisa May Alcott, Julia Ward Howe, Lucy Stone and that was before she married Conrad (17 years her senior) at age 28.  You can read more about here here.

During the 20 years that the Millers lived at Sonnystone the area had faltered commercially.  Evansville’s population, which had declined between 1840 and 1850 to only 3,235, surged to 11,484 in 1860 and businesses there were growing strong.  The areas around Sonnystone — Mechanicsville, Kratzville, and McCutchanville — were mostly farms.

John Reed bought the estate in 1860 and he and his family farmed here for 63 years.

The Reeds have a convoluted story to tell…

One thought on “The Sonnystone Saga: The Millers”