To celebrate 17 years living at Sonnystone Acres, we are publishing  a series of posts chronicling the first three families who lived here, spanning 111 years… This is the seventh installment of the series…

Soon after the death of his wife in 1817, Charles McCutchan-Johnstone sold his businesses in County Longford, Ireland, gathered up his seven children, and set out for the USA.  They arrived at Pittsburg, PA, where Charles (hereafter the family name is McJohnston) bought flatboats and traveled down the Ohio River to Evansville, IN.  Eville had little to show for itself in 1819, so McJohnston continued past it and up the Pigeon Creek until he reached Stringtown Hill road where he disembarked.  He had brought with him, besides household goods, a wagon, horses and plenty of pounds sterling…  He headed northward along Stringtown Road Ridge.  In 1819 the “road” was nothing more than a winding path through the forest from which the saplings and underbrush had been cut, but which had giant forest trees standing in its center along its entire course.

Instead of following the road northward and on toward Vincennes and Princeton, as earlier arrivals had done, Mr. McJohnston struck out eastward on an Indian trail about a quarter mile past Sonnystone, now called Petersburg Road.  The family crossed the valley, and climbed the next ridge of hills where they stopped. The land had been government property since the Indian treaties and was open to claim. He registered approximately one thousand acres at the Vincennes Land Office.  Upon those acres lay the future village of McCutchanville.

There was an influx of settlers who followed the McJohnstons.  Do you remember the Inwoods?  William Inwood, father of both of John Reed’s wives, also arrived in 1819 with his family; his son John married one of McJohnston’s daughters.   There were the Erskines, the Wheelers, the Maidlows, the Hornbecks.  McJohnston’s brother, William McCutchan, came later.  The area around McCutchanville was known in those early days as the “British Settlement”. By the end of 1820 there were 53 families who owned 12,800 acres of land and capital of $80,000…about 1.2 million today.  Not a bad start.

It was 1823 before Levi Igleheart, Sr. arrived with his family.  The Igleheart family had come to Maryland from Germany in 1740.  Levi’s father, John, had fought in the Revolutionary War and owned plantations in Prince George’s County, Maryland.  Levi and his wife were Woke!  They decided slavery was wrong and sold their slaves (you could not actually Free slaves in those days; there were Laws against free black people living in the slave states).  However, they found they couldn’t farm the property without the slaves, so they sold their land to relatives and pioneered west.  After a stop in Kentucky, they finally settled on the outskirts of McCutchanville along the eastern edge of Vanderburgh County. 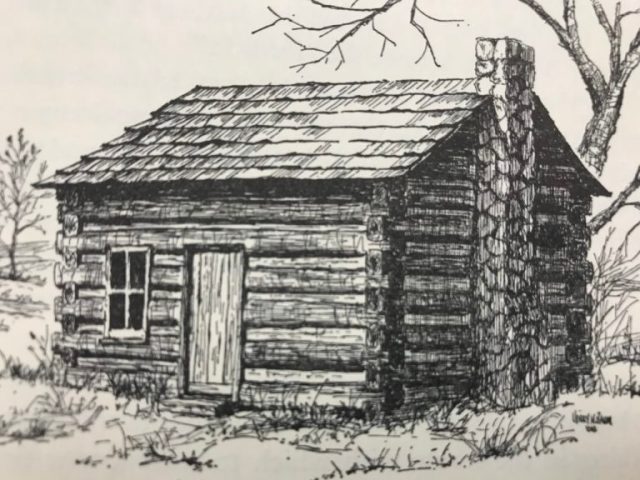 The community was tight-knit.  There was a lot of work to be done clearing and building homes, barns, and mills.  Though of varying denominations, there was a circuit rider that began to visit the village in the early 1820s. The homes most often visited were those of Charles McJohnston, Sr., Levi Igleheart, Sr., Mark Wheeler, John Erskine, Sr. The preacher came on Saturday night, sometimes traveling for a month to get there. Two services were held on the Sabbath, morning and afternoon. The living room was cleared, beds were removed and slabs were brought in and set up for seats. The “congregation” had traveled anywhere from 5 to 10 miles on horseback, in wagons, and on foot. They brought cold lunches with them that were supplemented by cooking done the day before by the homeowner.

The village built their first schoolhouse in 1832.   Girls were given the same consideration for education as the boys. It was 1845 when Samuel McCutchan (McJohnston’s nephew) was appointed the first Postmaster and the community was named after him.  That same year, ground was broken to build a Methodist-episcopal church-building with $300 old Charles McJohnston had willed for that purpose.

From McCutchanville to the Evansville Court House it was about 8 miles.  The only way to get there was down Petersburg Road to Stringtown Rd, past Sonnystone Acres and down the hill across Pigeon Creek to the flatland.  We are situated about about halfway between the two places, so the residents of McCutchanville passed by Sonnystone on a regular basis on their way to town.

100 years after McJohnston blazed that trail, one of the descendants of those early settlers, Albion Mary Smith, moved into Sonnystone and she and her husband, George Davis Smith,  placed the S on the chimney.