The first birthday that I blogged was in 2005, when I visited NYC to experience the Christo and Jeanne-Claude exhibit, The Gates.. The exhibit ran from February 12, 2005 through February 27, 2005.  According to Christo’s web site, all told, 7,503 individual gates were installed.  It was a once-in-a-lifetime…  We had been to see Emmylou Harris and Vince Gill perform on the Grand Ole Opry in Nashville the night before I flew out.  While in New York, I was feted with Magnolia cupcakes and a trip to the Metropolitan Opera… 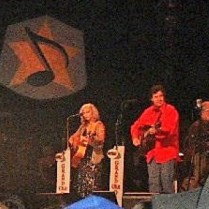 I have shared that year with you before, but no one read it…  Looking back on the old blog posts from the 2004-2009 Primitive Platform, I cringe.  I apologize for not capitalizing.  The pictures are dark and I can’t zoom on them.  But it’s what we’ve got..

The old Sonnystone chronicled a 2007 birthday party that I had with my sister, her kids, and grandkids and my cousin, her daughter and grand-daughter…

it was a rainy, thundery, gloomy day outside, but inside it was warm and fun, even funny, thanks to my wonderful family.  my camera seems to give everybody “devil” eyes, but we’re really more angelic than we look in these pictures.

we finished with a rousing game of “stick the tail on the donkey” and everyone won!

thanks again…i love you all.

That’s the kind of birthday party I’m planning for “our burday” on Saturday with Samantha.  I still have the pin-the-tail-on-the-donkey game!  Ariel and the Little Mermaid is our theme and we have hats for everyone!