I wasn’t too awfully taken in with the Solar Eclipse phenom, but since we’re located so close to the action (81 miles to Hopkinsville, KY and 99 miles to Carbondale, IL) it has been the talk of the town.  People flocked to the areas of totality, and it looked to me like they had an Awesome experience.  Eville was to be 99% and I figured that would be good enough.  My son and his co-workers at the Hwy Department worked special hours today, driving to the roads to corral the hordes of folks expected to line the shoulders to see the eclipse.  They were warned that animals would be freaking out in the daytime-darkness and that bats would come out.

Well, what a surprise…  I went down to get my nails done and Kim, my manicurist, had some solar glasses.  I was the only customer and we all went outside and took turns using the glasses. 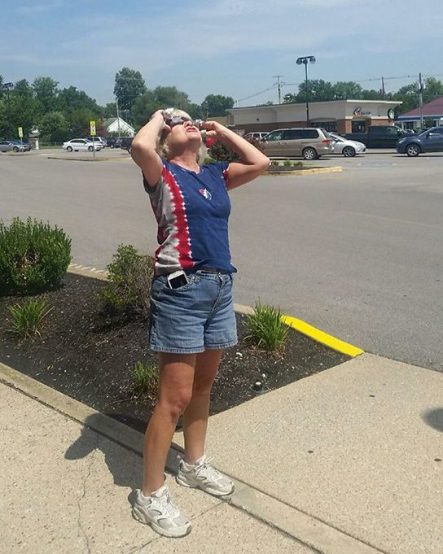 It was way cool…but…it did not get dark.  It was a little like having sunglasses on, and it felt a bit eerie, but the shadows remained strong.  I’m like…what?   There was just a sliver, a small rim of the sun still showing, but 1% was enough to cast a strong shadow.  Amazing.  That Sun is one helluva star… (No, the animals were cool with the event, and no crowds were lining the sides of the highway.)

I’ve been pulled away to help my cousin with his elderly dad and I’ve made a half-dozen trips to Grayville and back, all of which started After we had already made a mess pulling stuff out of the attic for the rummage sale.  In addition, we’re getting Olivia to and from school and watching Samantha on T-W-and part of Th.  The sale is this Saturday and the weather is supposed to be good.

I have to admit, kids, that the constant barrage of shit from Washington is making me sick and tired.  I try to ignore it, but I just can’t!  Just when things seem to calm down, another catastrophe occurs.  I’m trying to stay positive, but It’s Really Bumming me out…  I’m not writing much because I can’t act like I’m not moved and upset, but I don’t think I write very well about it.  I wish I could.

Anyway, I’ll see you at the rummage sale this week-end…I’m selling my old albums and a record player (that works)…you know you need you some vintage vinyl…