Happy St. Nicholas Day!  Did you remember to put your boot out so the Tall Guy could fill them with chocolate and fruit?  Hey, I’m not sharing… 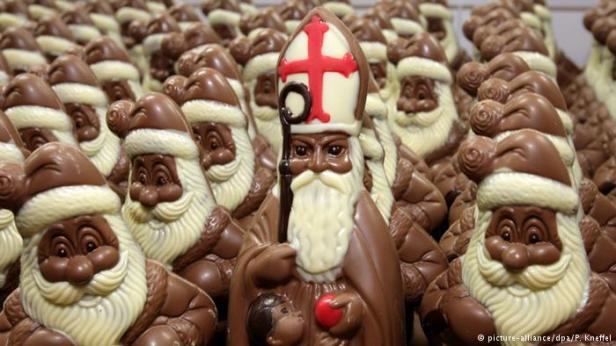 Have you ever read about the St. Nicholas tradition in Holland?  They celebrate All Day on the 5th… I like this Sinterklaas guy…

St. Nicholas’ day is on the 6th December, but in The Netherlands, the major celebrations are held on the 5th December.

It all starts on the second Saturday of November (the first Saturday after 11th November) when Sinterklaas travels to a city or town in The Netherlands. Dutch tradition says that St. Nicholas lives in Madrid, Spain and every year he chooses a different harbour to arrive in Holland, so as many children as possible get a chance to see him.

Sinterklass travels with his servants called ‘Zwarte Pieten’ (‘Black Peters’). When Sinterklaas and the Black Peters come ashore from the steam boat, all of the local church bells ring in celebration. Sinterklaas, dressed in his red robes, leads a procession through the town, riding a white horse. Every town in The Netherlands has a few Sinterklaas helpers, dressed the same as Sinterklaas who help give the presents out. (and sometimes you might one see one or more Zwarte Pieten with Sinterklaas!)

On the evening that Sinterklaas arrives in The Netherlands, children leave a shoe out by the fireplace or sometimes a windowsill and sing Sinterklaas songs. They hope that Sinterklaas will come during the night with some presents. They also believe that if they leave some hay and carrots in their shoes for Sinterklaas’s horse, they will be left some sweets or small presents. They’re told that, during the night, Sinterklaas rides on the roofs on his horse and that a ‘Zwarte Piet’ will then climb down the chimney (or through a window) and put the presents and/or candy in their shoes.

The evening of December 5th is called St. Nicholas’ Eve ‘Sinterklaasavond’ or ‘Pakjesavond’ (present evening). The children will receive their presents during the evening. There might be a knock at the door and you might find a sack full of presents!

On the 6th of December (his birthday) Sinterklaas leaves the Netherlands on a steamboat from Rotterdam and travels back to Spain.

So I guess we missed out on that party…maybe next year.  It could be a nice alternative to folks needing to be in 3 different places on the 25th.  Not sure  Black Peter (and I thought it was just a Dead song) will effectively take over the spot of the Elves, but we could work on a movie, churn out some PR…and there’s already some great St. Nick carols to warble…