It’s been a while since I watched TV news.  Okay, I’ve caught a glimpse of the evening news when we’re waiting for local weather reports, but I do not watch ABC, CBS, NBC, MSNBC, CNN, or Fox.   If there is Real Breaking news and I simply must watch, I stick with CNN, but talking heads distract and aggravate me. Still, I’m very up-to-date on happenings because I Read the news from all of the above sources, as well as The Guardian, several news magazines, and Google.

I personally like directed ads and help Mr. Facebook to not bother me with crap that I won’t buy, but rather inspire me with a pop-up ad pointed to my needs as calculated by my browsing history.  It’s occasionally embarassing:  “Gas-X is just what the doctor ordered” … but it’s appropro.

In the same way, Google News has watched my news-source choices carefully.  They suggest, daily, headlines Just For Me.  It’s so fun to be special.

Geesh, I feel sorry for the people who work there.  But really, if you don’t follow football, what else is there to do after the parade and the meal?  I would suggest a bar, as they have always opened by 6pm…  I love to shop, though, wielding my coupons like weapons, smugly snapping up bargains like a squirrel at the bird-feeder.  I Do Not like fighting other people for my deals.  I won’t be there… 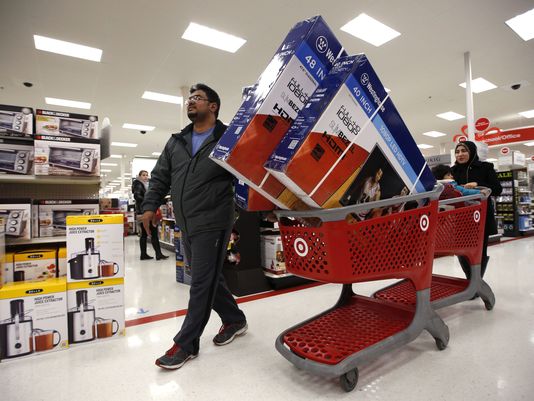 Bright Star, a new musical by Steve Martin and Edie Brickell, will open on Broadway at the Cort Theatre on March 24, producer Joey Parnes announced. The production, which is directed by Tony Award winner Walter Bobbie, will begin previews on February 25.

Inspired by Brickell and Martin’s Grammy-winning album, Love Has Come for You, the musical follows a young soldier who is just home from World War II. With the editor of a Southern literary journal, he discovers a secret that changes their lives. The production had its world premiere run at San Diego’s Old Globe Theatre in 2014.

I love Steve Martin, not too sure about Edie Brickell since she battered her short, old-man husband.  Really, These previews tickets would be a great birthday present, hint-hint…

So that’s what Mr. Google suggested this morning:  horse races, shopping, and Broadway plays.  So much better than the stories fed to the herd, don’t you think?  Not even a mention of a debate, heh-heh-heh…