Oh, the irony…we were to make up a snow day today, but it snowed…   I like it, though, as we will still only have to make up 1.

I spent 8 hours of the week-end out at Amazonia, talking with the people and animals, walking up and down soaking up the humidity and light.  Naturally, I took tons of pictures and here are a few… 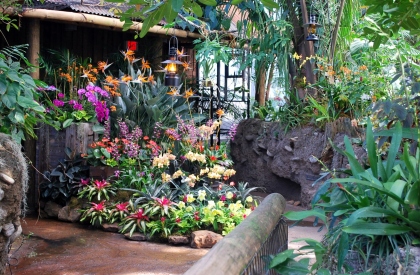 It’s pretty safe to say that there is no flower more widely coveted than the orchid. With their delicate, sculptural beauty and historical rarity, orchids carry an unrivaled suggestion of refinement. The exotic flowers are now cultivated in a wide variety of colors and delicately shaped blossoms, making them beautiful both on their own and as an addition to arrangements, but they retain their association with very special occasions.

Different cultures throughout history have believed in the healing, disease-fighting and protective properties of the orchid. In traditional Chinese medicine the orchid is used to help cure coughs and lung illnesses. The ancient Greeks associated it with virility, and the Aztecs were said to drink a mixture of the vanilla orchid and chocolate to give them power and strength.

With an estimated 25,000 different types existing naturally, orchids are of the largest flowering plant families, but they have always carried an impression of rarity. Some tropical species grow in virtually inaccessible habitats and have never been seen more than a handful of times in the wild. Their exotic mystique and otherworldly beauty was irresistible to the Victorians, who collected and displayed them like treasures. Consequently, they became a sign of luxury and refined tastes. Today they are still hunted and traded by avid international orchid collectors, who also prize them for their long-lasting blooms. 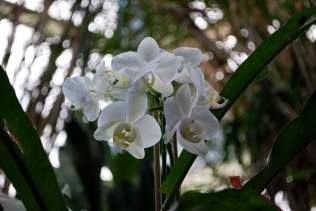 Just one more…the display at the top (and in this mosaic) was just beautiful and the show-stopper was a 30-year-old (yes, thirty plus years alive) Bird of Paradise that has been in our Zoo’s greenhouse for many of those.  Its blooms this year were so prolific and pretty that our curator pulled out the forklift and brought it in for us all to enjoy…

I suppose I’m going to have to put on my snow boots now…  Stay warm, friends.

3 thoughts on “Orchids…and a Bird of Paradise”