The crowds were quite crowd-y at Disney…the days between Christmas and New Year are the busiest with estimated attendance 130,000 at all four parks, about 1/3 of that number at Magic Kingdom.  Humanity can be kinda crushing at times and the lines get long.  True to form, Disney makes standing on queue an adventure:

On line to meet Buzz and Woody 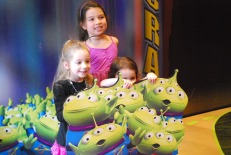 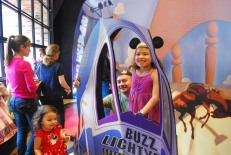 It wasn’t a super-long line, but there was enough time to do a lot of posing… 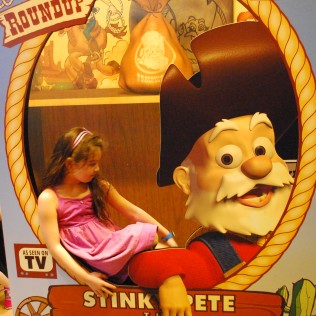 and even some running around…

We all love people-watching when we’re at TheWorld.  People-listening is nearly as fun.  Who can forget the snotty little brat that stood behind us?

And in this line for

there was a toddler-type (not ours) intermittently screaming like a banshee:

The guy standing out in front of the Small World line was barking like Billy Bigelow, “worst line in the park, don’t stop here” or words to that effect;  in reality, it is Always a very quick line. That’s the kind of stuff we professional disney-e(a)rs know;  and we know where the characters are, too.  More later.