it feels so exhilarating to walk into Ellis Park for the first time each summer—as exhilarating as you can muster in oppressive heat and humidity.  post-time is 12:50 this year and we got there around 11:30 to get our usual spot.  now, our usual spot isn’t in the shade until 1-1:30 except for some small slivers where we shoved some chairs and waited.  by the time we sang the national anthem i had sweat entirely through my clothes and as i removed my hat, my eyes were covered with streams of sweat.  though this experience is not new, i am older.  i’ve always resisted the idea of sitting in the clubhouse air-conditioning watching the races on tv, rationalizing that you weren’t really at the races unless you’re hanging at the fence shouting and rooting your horse in.  but sunday i discovered the best of both worlds.  after the first race we gathered our duds and went on down to the beer garden.  we elbowed our way onto some stools that were directly in front of the tv’s, but with a grand view of the horses being shown and led out.  sitting under a canopy with large fans blowing from every corner, having our dollar beer served to us, betting booths close by, plenty of  people shouting and rooting for their horses, and re-runs of close races with angles we could never have seen at the fence…..it’s my new spot, folks.

the beer garden from my barstool

that was a close one

i did move my sweaty self  around to take some pictures of the horses, but the day was so bright that most of the them are rather blown out.  i started out badly, losing an across-the-board wager in the first, but i rebounded and won in each of the others that i bet.  i can hardly wait to go again this friday!! 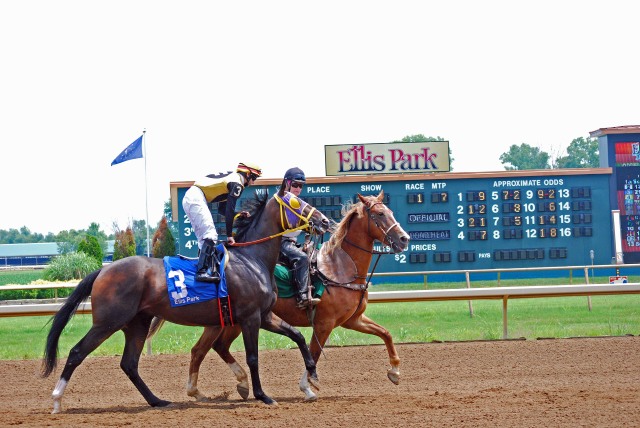